Is anyone working on an OxyPlot backend for GTk#, or for MonoMac?

People in the F# community are looking for cross-platform charting solutions for basic data visualization purposes in data science programming, and OxyPlot looks like a good candidate for native charting (as opposed to HTML5 charting).

It would be very interesting to see an implementations for OS X!

moljac is working on a Xamarin component - it would be great to see a Xamarin.Mac version in there too!
https://oxyplot.codeplex.com/SourceControl/network/forks/moljac/OxyPlotXamarinComponent

Objo, the altsoft guys who just ported Oxyplot (http://www.altsoftlab.com/) make mention of QT and GTK on their website, do you know if this implies it would be easy to use GTK# as a native charting option?

Alternatively, I have been playing around a lot with R.NET. The grid package in R contains all the primitives needed for IRenderContext (excepting some things like ellipses which could be manually done). Most importantly, they implement a textsizemeasurement technique, which for some reason seems hard to find in many places (are you still hoping to remove this though?).

I am writing a wrapper around the R grid package in .NET right now. One advantage of this is if we had Oxyplot to R-Grid Package, we would instantly get access to all the devices in the R "grDevices" package, namely PDF, EPS, PNG, BMP, X11, Screens, etc. etc. This would allow for PDF output on mac and linux to. Not sure if the R dependency would preclude inclusion in the main trunk or if the GTK option is already implied by altsoft, but would be curious to know.

I have only tested the Silverlight version of the altsoftlab port, and the implementation of the IRenderContext seems to be 100%! I don't know how to use it with QT or GTK.

Do you mean http://rdotnet.codeplex.com/ ? I did not see grDevices there.

I am planning to add simple pdf export capabilities into the core library, this will make it available on all platforms and produce identical output everywhere. Hopefully I can submit the code soon! 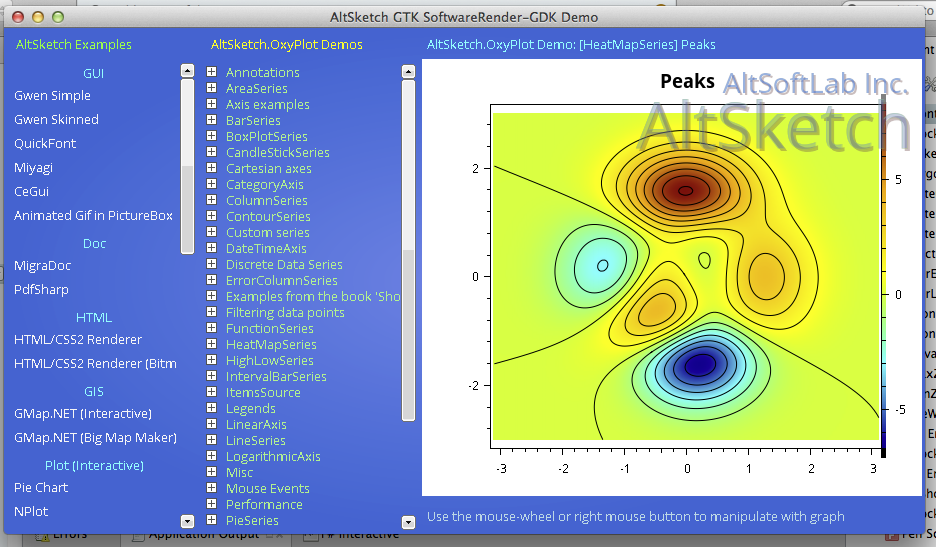 On the positive side, the plot appears! However, the program gave me a SIGSEV right after taking that screen shot, so I don't know whether or not to call that a proof of principal. The altsketch code also looks a bit hairy and undocumented, so I am not sure how easy it would be to turn it into a native plot utility for F# purposes. Will take a bit of a longer look at it if I can find the time later.

Yep, I did mean http://rdotnet.codeplex.com/ . The grDevices is a library that comes by default with an R installation and handles all the different output devices that can be rendered to. (The figure at the very start of 1.2 in this book probably explains it best: http://www.e-reading.biz/bookreader.php/137370/C486x_C06.pdf )

Simple cross platform PDF export would be AWESOME. Will definitely look forward to seeing that soon!

All the best,
Nigel

I have been looking at this today, going directly to the Mono GTk bindings. I have some most things working, but will need help from a GTk expert for some things. Working on the ExampleBrowser now.

Here's a first cut at a Gtk# backend: https://oxyplot.codeplex.com/SourceControl/network/forks/dsyme/gtksharp/changeset/5f2a17d02561. it uses Mono.Cairo to do the drawing. There are still some TODOs, but all the plots in the ExampleBrowser basically seem to work on both Mac and Windows (using the same portable executable). Caveats This is very cool, I'll check it out!

Here are the possible TODOs (I don't think any are blocking, though it would be very nice to fix the first, and the others would likely improve the beauty of the plots)

Great! I could not get the ExampleBrowser to run (Windows 8.1) yesterday, will try to reinstall XamarinStudio and GTK#.
DpiX and DpiY are no more needed in the render context. Sync with the latest version and remove the GetImageInfo method.

For those interested, here is a script which shows an example of using OxyPlot.GtkSharp.dll from F# Interactive on OSX.

@objo - can you check tthat I did the merge of the latest oxyplot code correctly? When I try to prepare a pull request it is showing many more diffs than I expected.

The branch I'm trying to send the PR from is here: https://oxyplot.codeplex.com/SourceControl/network/forks/dsyme/gtksharp?branch=default

I did something like this:
Did I forget something? I'm new to Mercurial.

It looks good! I pulled it into the main branch!
I also added an OxyPlot.GtkSharp solution and applied StyleCop code cleanup to the new files.

Great! Could you also add a nuget package for this? We want to use it in FSharp.Charting on OSX.

I have built for .NET 4.0:
http://www.nuget.org/packages/OxyPlot.GtkSharp/
Can this assembly be used on OSX?

Yes, it works just fine. See the sample here (this is using it from F# Interactive - called fsharpi on OSX)

There is also a discussion thread here in the the F# community: https://groups.google.com/forum/#!topic/fsharp-opensource/SlOS0-vyyKI